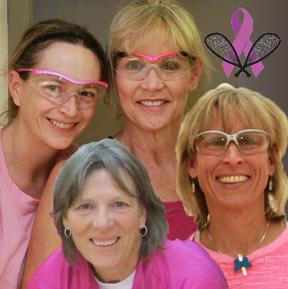 The Racquet for the Cure Committee is made up of active and committed racquetball enthusiasts and supporters who are passionate about finding a cure for breast cancer. Volunteers are always welcome so if you're interested, contact any of the committee members linked below for more details.

Among non-profit fundraisers, Racquet for the Cure is a small project, with big potential. In 2000, the inaugural Racquet for the Cure event in Denver, Colorado raised a scant $200 for the Susan G. Komen Foundation. But it grew to $600 the following year, and reached well into the thousands each year thereafter. The concept was initiated by Cindi Middlekauff, later aided by Missy Zantop, then guided by committee chair Jean Gallagher (2002-2007), and further developed by Jo Shattuck as pro tour liaison during her touring career (2007-2012). Current organizers have been involved over the long haul, and continue to guide the effort beyond its $100,000 benchmark, reached in 2016.

Like other pink-ribbon fundraisers, Racquet for the Cure resonates with supporters across a wide spectrum – from recreational players to tournament regulars, young and old, male and female, amateur to pro. Matching the dedication of those who support the cure through play is what sustains our fundraising success.

First and foremost, the RFTC team format was designed to offer women a specialty tournament experience - with an emphasis on bringing more female competitors into the sport. Early in its history (2000-2007), the event incorporated women's pro tour exhibitions, offered standard division play exclusively for women, and later added a Mixed Doubles Fundraiser. Over time, added men's singles and doubles divisions have been offered; however, the event continues to review its lineup each year to maximize court time and opportunity for women in racquetball.

RACQUET FOR THE CURE